Pilot dies while plane takes off from Chicago
An Envoy Air pilot passed out while taking off from Chicago O’Hare International Airport and was later pronounced dead, officials said on Tuesday. The co-pilot took control of the plane and managed to land safely. The incident involved Envoy Air Flight 3556, an Embraer E175 aircraft, which was scheduled to fly to Columbus, Ohio on Saturday night. The flight was flown for American Eagle, which – like Envoy Air – is part of American Airlines. “We need to return. Captain is incapacitated,” the co-pilot told air traffic control just seconds after taking off from Chicago’s international airport. The plane landed safely a short time later. “Despite heroic efforts to revive him, Captain in training, Patrick Ford, passed away,” Ric Wilson, the Vice President of Flight Operations at Envoy Air, said in a message to fellow pilots. “We are deeply saddened by this loss.” The Federal Aviation Administration (FAA) is investigating the incident. Aviation sources said Ford died of a heart attack, though officials were not able to confirm that. “Sincere thanks to Line Check Airman, Captain Brandon Hendrickson, for his leadership and professionalism in the safe handling of his aircraft, passengers and crew,” Wilson said. Source

FAA is now investigating after the captain of American Eagle (Envoy) Flight 3556 became incapacitated shortly after taking off from ORD Saturday night. The captain died later at a hospital. The copilot safely landed the plane at ORD. 57 passengers & crewpic.twitter.com/pcvFIuUCM9

Plane Smashes Into Fire Truck As It Nears Takeoff In Peru

🇵🇪 Plane smashes into fire truck as it nears takeoff in Peru pic.twitter.com/VzzOHrlZ8L

Two firefighters have died after a plane crashed into a fire truck while taking off at Peru's busiest airport. The Latam Airlines plane collided with the truck just before 15:30 (20:30 GMT) on Friday at Jorge Chávez International Airport in the capital, Lima. Video posted on social media shows the plane careering down the runway, catching fire and smoking as it ground to a halt. No passengers or flight crew were killed, the airline said on Twitter. A 31-year-old firefighter is in a critical condition, according to an executive director of the hospital agency EsSalud. Peru's Health Ministry added that 20 passengers are being treated for injuries - two of them are believed to be serious. It remains unclear why the fire truck entered the runway while the plane was taking off, bound for the southern Peruvian city of Juliaca. During a news conference, Latam CEO Manuel Van Oordt said the flight had been cleared for take-off. "We don't know why [the fire truck] was there," he said. "We didn't ask for their services." The prosecutors' office said it was investigating the incident as potential manslaughter, according to Reuters news agency. Lima Airport Partners (LAP) - which operates Jorge Chávez Airport - has suspended flights until Saturday afternoon at the airport. International flights due to land there have been diverted to Colombia, Panama and various Peruvian cities including Iquitos, Pisco, and Arequipa. In a statement LAP added: "At this moment we are finding and investigating all the necessary factors that could determine the cause of this." President Pedro Castillo paid tribute to the firefighters on social media. "I express my heartfelt condolences to the relatives of Ángel Torres and Nicolás Santa Gadea, brave firefighters who died in the accident," he wrote on Twitter. "My thoughts and my prayers are with them. I pray for the recovery of the wounded." Source
at November 19, 2022 No comments: 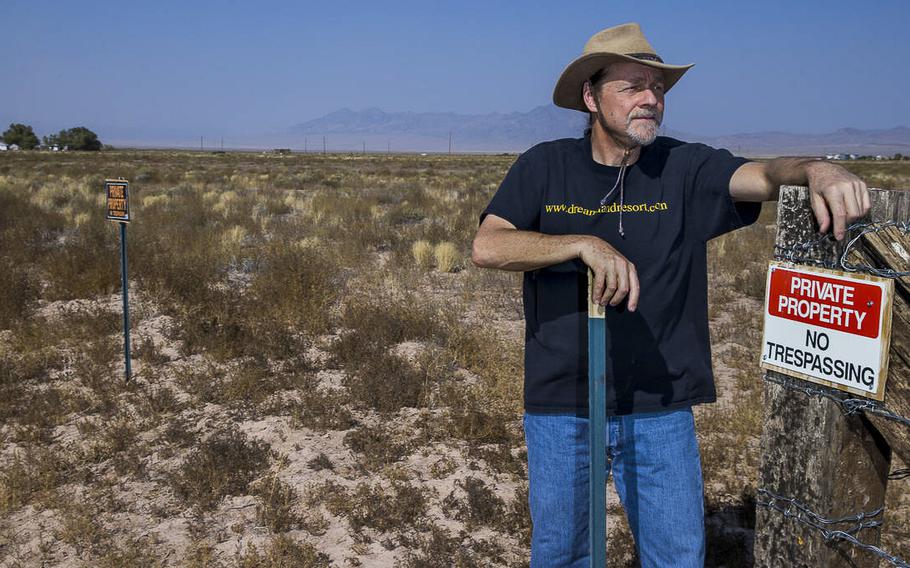 Air Force, FBI raid homes in probe of Area 51 website
Agents from the U.S. Air Force and FBI recently raided homes in Clark and Lincoln counties in an investigation of a man who operates a website about the top-secret military base known as Area 51, a spokesman said Wednesday. The Air Force Office of Special Investigations and FBI entered homes owned by Joerg Arnu in Las Vegas and the tiny town of Rachel on Nov. 3 and seized potential evidence for an undisclosed joint agency probe, according to Lt. Col. Bryon McGarry, spokesman for Nellis Air Force Base in Las Vegas. “This is an open and ongoing law enforcement investigation between the Las Vegas FBI and Air Force OSI,” McGarry said in a statement. He declined to elaborate on the basis for the investigation, but Arnu, of Las Vegas, is the webmaster of a site titled Dreamland Resort, focusing on Area 51, an Air Force base in Lincoln County about 120 miles northwest of Las Vegas where testing is conducted on new and classified U.S. military aircraft. Dreamland Resort, at dreamlandresort.com, started by Arnu in 1999, features YouTube videos taken from drones flown over places around Area 51, satellite images of the base, a discussion forum with posts on the topic, articles on test flights, “black projects” and UFOs, and what it says are photos of new vehicles such as the so-called “super secret” Northrop Grumman RQ-180 unmanned stealth aircraft shown flying in 2021. Arnu, reached by email Wednesday, declined comment until he can speak to his attorney. But he forwarded a news release posted on his web page last week telling his side of the story. “I believe the search, executed with completely unnecessary force by overzealous government agents was meant as a message to silence the Area 51 research community,” he said.Arnu said both his homes were raided “without warning” on Nov. 3 “by 15-20 agents in full riot gear.” The agents broke open the doors while Arnu was in the Rachel home and his girlfriend at the Las Vegas one, and then they “were detained and treated in the most disrespectful way.” “My girlfriend was led out into the street barefoot and only in her underwear in full view of the neighbors,” he said. “I was led outside, handcuffed and only in a t-shirt and sweats in sub-freezing temperatures.” Source
at November 17, 2022 No comments: