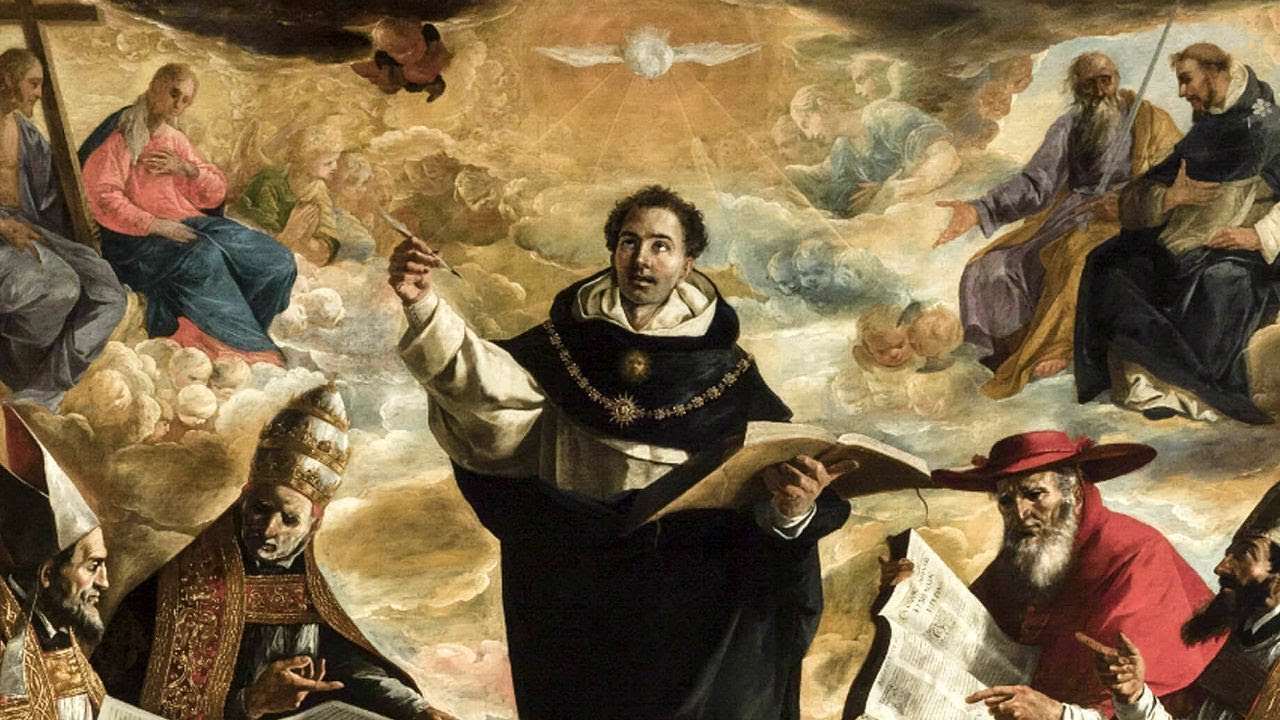 Thomas Aquinas was born at the family castle near Aquino, Italy, in 1225. He was the son of Count Landulf of Aquino. When he was only five years old he was sent to Benedictine Monte Cassino Monastery to be educated. When he was 14 he went to Naples to complete his education and while there joined the Dominicans.
His family was so outraged by this that they actually had him kidnapped and held captive at Roccasecca Castle to try to keep him out of the Dominican order. He spent 15 months in the castle, and when released, rejoined the Dominicans and went to study in Paris. He was ordained in Cologne around the year 1250. While studying there under St. Albert the Great, he was nicknamed “The Dumb Ox,” due principally to his large size and quiet manner. But Thomas was anything but dumb. He became a master of Theology at Paris in 1256, and taught not only in Naples but also in Anagni, Orvieto, Rome and Viterbo.
It was during this time that he was writing his Summa Theologia and finishing his Summa Contra Gentiles. When he was only 22 years old he was sent to teach in Cologne and he began to publish his first works. He received his doctorate at age 30.
Thomas was a personal friend of St. Louis, the King of France, and they spent a lot of time together. Pope Clement IV offered Thomas the archbishopric of Naples, but he declined the offer. He spent much time writing and eventually his writings filled 20 hefty tomes. Unfortunately, his greatest work, Summa Theologia, was never completed because on his way to the second Council of Lyons in 1274, Thomas fell ill and died at the Cistercian monastery there.
Lessons
St. Thomas was not only brilliant, but also very humble and holy. He is one of the greatest and most influential theologians of all time. Even seven centuries after his death, his thought still dominates Catholic teaching. His writings are characterized by the interconnection of faith and reason. He points out that even though many Christian doctrines are impossible to establish by reason, they are not contrary to reason and reach us by revelation. However, he also believed that truths such as the existence of God, His creative power, and His Providence, could in fact be discovered by natural reason. St. Thomas also wrote hymns, commentaries on Scripture, the Lord’s Prayer and the Apostle’s Creed. He was canonized by Pope John XXII in 1323, and was declared a Doctor of the Church by Pope St. Pius V in 1567. St. Thomas Aquinas is the patron of all universities, colleges, and schools. All theological students are required to study his thought and the substance of his work has become the official teaching of the Catholic Church.
Prayer
Heavenly Father, we pray that St. Thomas Aquinas is being richly rewarded in heaven as he richly endowed us while on earth. His brilliant and beautiful writings have inspired countless souls and we are eternally grateful for his legacy. St. Thomas Aquinas, pray for us. Amen. Source
at January 28, 2021