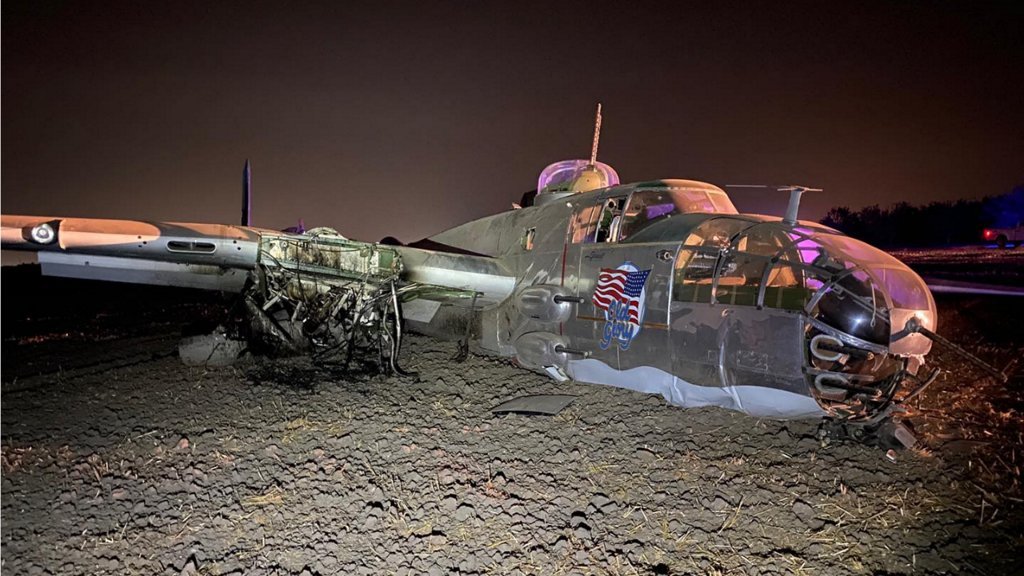 A World War II-era B-25 “Mitchell” has crashed in Stockton, California
Three people were injured after a World War II-era plane crashed in Stockton on Saturday evening, according to the San Joaquin County Sheriff’s Office. Authorities said the plane crashed at around 7:30 p.m. into an irrigation ditch in an open field in the area of Roberts Road and Muller Road. The Old Glory B-25 “Mitchell” vintage WWII bomber (reg. N7946C) was badly damaged. Two of the three people were taken to the hospital for non-life-threatening injuries, according to deputies. The other person did not need hospital treatment. Investigators said the cause of the crash was a mechanical failure. Source

Texas Roadhouse CEO Kent Taylor Killed Self After Hearing Voices In The Air....Similar To What US Spies And Diplomats Experienced - The Havana Syndrome.

March 20, 2021
Voices will be heard in the air. Men will beat their heads against walls, call for their death, and on another side death will be their torment. Blood will flow on all sides.  Our Lady of La Salette 19 Sept. 1846 (Published by Mélanie 1879) Havana syndrome is a set of medical signs and symptoms experienced by United States and Canadian embassy staff in Cuba. Beginning in August 2017, reports surfaced that American and Canadian diplomatic personnel in Cuba had suffered a variety of health problems, dating back to late 2016. The U.S. government accused Cuba of perpetrating unspecified attacks causing these symptoms. The U.S. reduced staff at their embassy to a minimum in response. In 2018, U.S. diplomats in China reported problems similar to those reported in Cuba, as well as undercover CIA agents operating in other countries who were negotiating with those countries on ways to counter Russian covert operations around the world. Subsequent studies of the affected diplomats in Cuba,
Post a Comment
Read more

March 24, 2021
God does pay attention. You blaspheme his Holy Name and you will pay for it  in this life or the next. Funny how everyone is afraid to say the 'N' word but all of you Blaspheme the Holy Name of Jesus 24/7. You have more reverence for the 'N' word then you do for the Holy Name of Jesus. The film blasphemes the Holy Name of Jesus over 20 times. Talladega Nights actor Houston Tumlin commits suicide at age 28: Child star who played Will Ferrell's son is 'found at home with self-inflicted gunshot wound'   Talladega Nights star Houston Tumlin has passed away at the age of 28. The actor, who was aged just 13 when he appeared in the 2006 Will Ferrell film, died by suicide on Tuesday afternoon at his home in Pelham, Alabama. Shelby County coroner Lina Evans told TMZ that Tumlin was killed by a self-inflicted gunshot to the head around 4:30pm. Sources told TMZ that Tumlin's girlfriend was in the house at the time. A note has not been found. Houston was a stan
Post a Comment
Read more