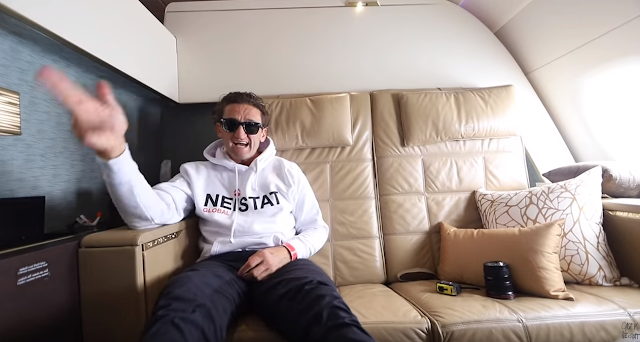 'Ridiculous luxury': YouTube star films his flight in Etihad's £52,000 A380 'Residence' suite, which has a living room, bedroom and a bathroom with a SHOWER

Welcome to the airline seat of your dreams and everyone else’s too – Etihad’s A380 The Residence.  The price? Up to £52,000 ($68,000) - it's the most expensive plane seat in the world. What do you get? As YouTube star Casey Neistat found out on a flight from Abu Dhabi to New York, a ‘borderline ridiculous’ amount of space and privacy.  He has posted a video of his experience in the suite, which features a living room area, a bedroom – and an ensuite with a shower and toilet. And it makes for captivating viewing. The video begins with Casey being walked to the gigantic A380 by a personal butler, dressed in Downton Abbey-style apparel.  Once inside Casey discovers that the suite, which was designed by London-based Acumen Design Associates, is like nothing else in the skies.  Source

Flying in the Habitat of Demons...