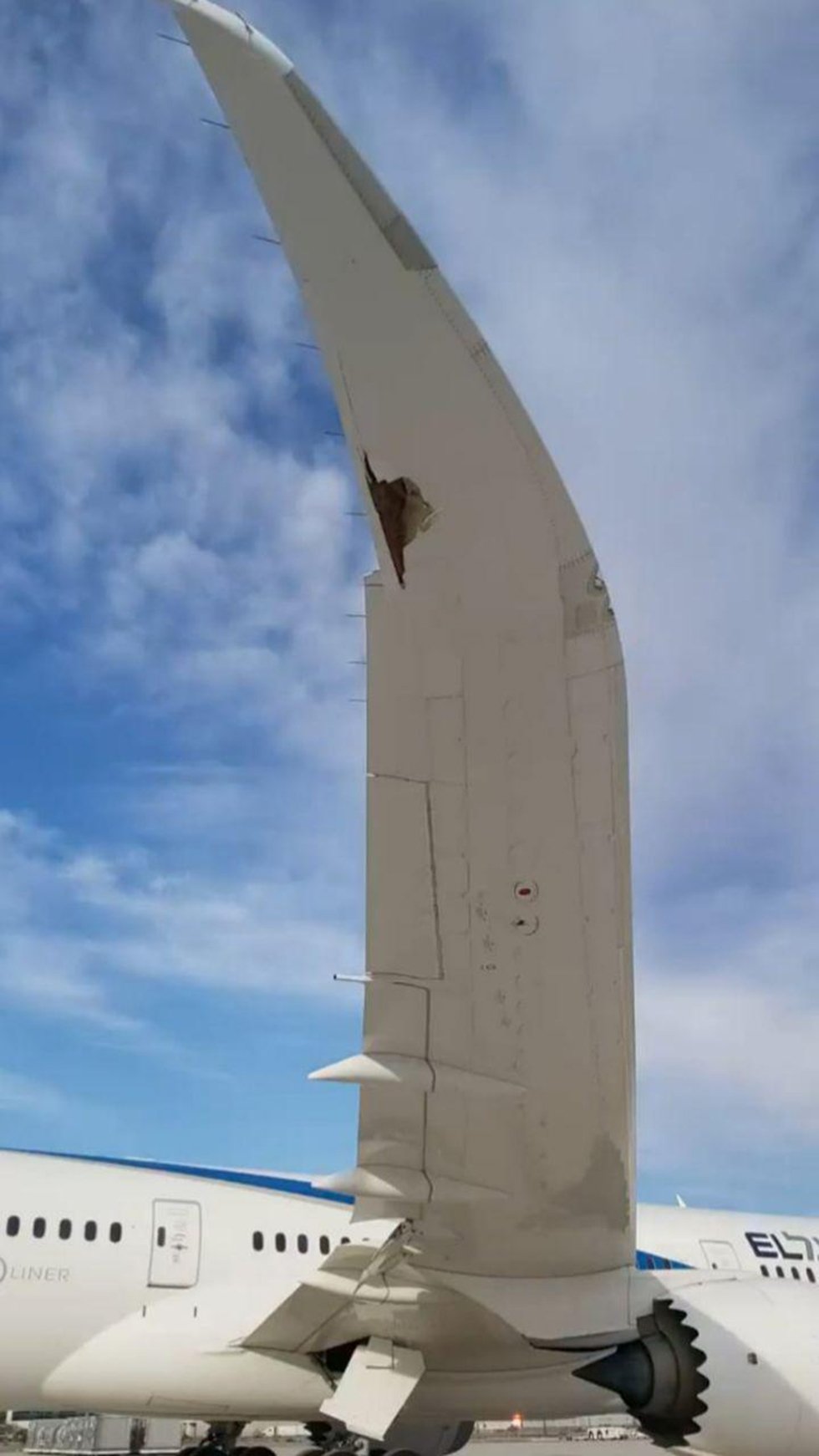 An El Al Boeing Dreamliner 787 hit a power pole at Las Vegas Airport on Saturday, causing severe damage to one of the wings, in addition to a power outage at the airport. The El Al Dreamliner (reg. 4X-EDH) flew Friday night from Ben-Gurion Airport, landing in Las Vegas. An investigation found that following the landing, airport employees allegedly refused to wait and guide the towing of the plane towards the jet bridge. This ultimately caused the plane to strike an electric pole. Due to the damage caused to the year-old airplane, it was grounded for repairs, leading to disruption to El Al’s flight schedule in the upcoming weeks. The plane was inducted into service in August 2017 as part of a plan to renew the company’s aging fleet of Boeing 747s and 767s. In response to the incident, El Al said that the flight from Las Vegas to Tel Aviv was cancelled as a result of the damage to the aircraft. Passengers were informed and provided with alternative flights to their destinations. El Al also issued an apology for the incident and “the unpleasantness caused to our customers.” Source

July 27, 2020
The air shall be infected by demons, who will appear under all sorts of hideous forms. Blessed Anna Maria Taigi (d. 1837)
Three days of darkness. What causes this darkness?
The visible manifestation of trillions upon trillions of Demons in the darksome Atmosphere - blocking out the sun light and moon light.
According to Catholic Doctrine the demons reside in our lower atmosphere - above 29,050ft - commercial aircraft have a cruising altitude of 35,000ft.
“When the Angels had sinned, and for their transgression were expelled the heavenly abodes; a large part of them were thrust ‘ into hell, called the abyss, and confined there: others of them were suffered to dwell near the moon, and in the region of the air, below the moon, and near our earth.” Eusebius of Caesarea
Our wrestling is not against flesh and blood; but against Principalities and Powers, against the rulers of the world of this darkness, against the spirits of wickedness in the high places. Ephesians 6:12
One reason that…
Post a Comment
Read more

I Pray For The Destruction Of The Airline Industry During Sunday Mass: Over 100 People On No-Fly List For Refusing To Wear A Mask, Delta CEO Ed Bastian Says

August 01, 2020
The darksome atmosphere is as a prison to the demons until the judgment day. They carry fire of hell with them wherever they go. The devils besought the Lord not to cast them into the abyss; for they asked for this, deeming it to be a punishment for them to be cast out of a place where they could injure men. Hence it is stated,They besought Him that He would not expel them out of the country. St Thomas Aquinas
In the year 1864, Lucifer together with a large number of demons will be unloosed from hell Our Lady of La Salette 19 Sept. 1846 (Published by Mélanie 1879)
The demons of the air together with the Antichrist will perform great wonders on earth and in the atmosphere, and men will become more and more perverted. Our Lady of La Salette 19 Sept. 1846 (Published by Mélanie 1879)
For the time has come when the most astonishing wonders will take place on the earth and in the air. Our Lady of La Salette 19 Sept. 1846 (Published by Mélanie 1879)
Our wrestling is not against f…
Post a Comment
Read more

August 09, 2020
Another flight named QFZ9964 (Registration EP-FAB) flying a Boeing 747 appeared to land on August 5. This was a Fars Air Qeshm flight that normally would have gone to Damascus. It landed in the evening. Source