List Of Man-Made Objects Left On The Surface Of Mercury & Question 74. The Fire Of The Final Conflagration: Article 2. Whether The Cleansing Of The World Will Be Effected By Fire?

ALL the works of men that are on the surface of Mercury or are orbiting Mercury at the End of Days must be returned to their place of origin in order to burn up in the Fire of the Final Conflagration.

If you find fault with this please by all means refute.

The first spacecraft to visit Mercury was Mariner 10, which imaged about 45 percent of the surface. And the MESSENGER spacecraft flew by Mercury three times and orbited the planet for four years before crashing on its surface. The European Space Agency is planning to launch their first mission to explore Mercury—BepiColombo—in 2018. Source


List of man-made objects left on the surface of Mercury:

Mariner 10 was an American robotic space probe launched by NASA on November 3, 1973, to fly by the planets Mercury and Venus.  Mariner 10 was launched approximately two years after Mariner 9 and was the last spacecraft in the Mariner program. (Mariner 11 and 12 were allocated to the Voyager program and redesignated Voyager 1 and Voyager 2.)  The mission objectives were to measure Mercury's environment, atmosphere, surface, and body characteristics and to make similar investigations of Venus. Secondary objectives were to perform experiments in the interplanetary medium and to obtain experience with a dual-planet gravity assist mission. Mariner 10's science team was led by Bruce C. Murray at the Jet Propulsion Laboratory. Source

After more than 10 years in operation, the MErcury Surface, Space ENvironment, GEochemistry, and Ranging (MESSENGER) spacecraft impacted the surface of Mercury on April 30, 2015, at a speed of more than 3.91 kilometers per second (8,750 miles per hour), marking the end of operations for the hugely successful Mercury orbiter. At the MESSENGER Nears End of Operations media and public event, scientists and engineers discussed the mission’s accomplishments, providing the top 10 scientific discoveries, as well as the technological innovations that grew out of the mission. Source 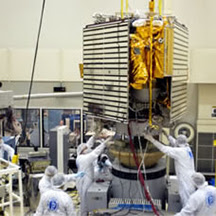 The European Space Agency and the Japanese Space Agency developed and launched a joint mission called BepiColombo, which will orbit Mercury with two probes: one to map the planet and the other to study its magnetosphere.Launched on October 20, 2018, BepiColombo is expected to reach Mercury in 2025. It will release a magnetometer probe into an elliptical orbit, then chemical rockets will fire to deposit the mapper probe into a circular orbit. Both probes will operate for one terrestrial year.The mapper probe carries an array of spectrometers similar to those on MESSENGER, and will study the planet at many different wavelengths including infrared, ultraviolet, X-ray and gamma ray. Source

Article 2. Whether the cleansing of the world will be effected by fire?

Objection 2. Further, just as fire has a cleansing virtue so has water. Since then all things are not capable of being cleansed by fire, and some need to be cleansed by water — which distinction is moreover observed by the Old Law — it would seem that fire will not at any rate cleanse all things.

Objection 3. Further, this cleansing would seem to consist in purifying the parts of the world by separating them from one another. Now the separation of the parts of the world from one another at the world's beginning was effected by God's power alone, for the work of distinction was carried out by that power: wherefore Anaxagoras asserted that the separation was effected by the act of the intellect which moves all things (cf. Aristotle, Phys. viii, 9). Therefore it would seem that at the end of the world the cleansing will be done immediately by God and not by fire.

On the contrary, It is written (Psalm 49:3): "A fire shall burn before Him, and a mighty tempest shall be around Him"; and afterwards in reference to the judgment (Psalm 49:4): "He shall call heaven from above, and the earth to judge His people." Therefore it would seem that the final cleansing of the world will be by means of fire.

Further, it is written (2 Peter 3:12): "The heavens being on fire will be dissolved, and the elements shall melt with the burning heat." Therefore this cleansing will be effected by fire.

I answer that, As stated above (Article 1) this cleansing of the world will remove from it the stain contracted from sin, and the impurity resulting from mixture, and will be a disposition to the perfection of glory; and consequently in this threefold respect it will be most fitting for it to be effected by fire. First, because since fire is the most noble of the elements, its natural properties are more like the properties of glory, and this is especially clear in regard to light. Secondly, because fire, on account of the efficacy of its active virtue, is not as susceptible as the other elements to the admixture of a foreign matter. Thirdly, because the sphere of fire is far removed from our abode; nor are we so familiar with the use of fire as with that of earth, water, and air, so that it is not so liable to depreciation. Moreover, it is most efficacious in cleansing and in separating by a process of rarefaction.

Reply to Objection 2. The first cleansing of the world by the deluge regarded only the stain of sin. Now the sin which was most prevalent then was the sin of concupiscence, and consequently it was fitting that the cleansing should be by means of its contrary, namely water. But the second cleansing regards both the stain of sin and the impurity of mixture, and in respect of both it is more fitting for it to be effected by fire than by water. For the power of water tends to unite rather than to separate; wherefore the natural impurity of the elements could not be removed by water as by fire. Moreover, at the end of the world the prevalent sin will be that of tepidity, as though the world were already growing old, because then, according to Matthew 24:12, "the charity of many shall grow cold," and consequently the cleansing will then be fittingly effected by fire. Nor is there any thing that cannot in some way be cleansed by fire: some things, however, cannot be cleansed by fire without being destroyed themselves, such as cloths and wooden vessels, and these the Law ordered to be cleansed with water; yet all these things will be finally destroyed by fire.

Reply to Objection 3. By the work of distinction things received different forms whereby they are distinct from one another: and consequently this could only be done by Him Who is the author of nature. But by the final cleansing things will be restored to the purity wherein they were created, wherefore created nature will be able to minister to its Creator to this effect; and for this reason is a creature employed as a minister, that it is ennobled thereby.

The husband and wife doctors from Boston among the four killed when a $3M private jet crashed into industrial laser factory in Connecticu...