List Of Man-Made Objects Left On The Surface Of The Moon & Question 74. The Fire Of The Final Conflagration: Article 1. Whether The World Is To Be Cleansed? 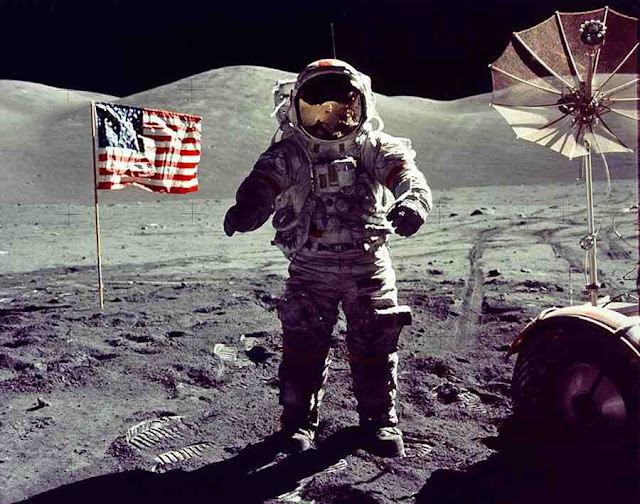 List of man-made objects left on the surface of the Moon:
Also containers of urine, flags, footprints, personal items and finally plaques. here

According to Catholic Dogma ALL the works of men will burn up in the Fire of the Final Conflagration at the end of days.

This Fire of the Final Conflagration will rise up from the bowls of the Earth to burn up ALL the works of men at the end of days.

This Fire of the Final Conflagration will rise up to a level no higher than the Waters of the Deluged reached during the time of Noe in order to cleanse ALL the works of men - which is a height of 15 cubits above the Mountain Tops or about 29,050 ft.

If this Catholic Dogma is True, then that means The Fire of the Final Conflagration will burn up only those works of men that are under this 29,050 ft.boundary - because the fire will go no further.

If this 29,050 ft boundary is true then that would mean that any work of man that occupies a place higher than  29,050 ft will escape the Fire of the Final Conflagration.

This of course is ridiculous.

Catholic Dogma states that ALL the works of men will burn up in the Fire of the Final Conflagration.

This means that ALL the works of men that occupy a higher place than the 29,050 ft boundary will have to be brought back below this boundary in order to burn up in the Fire of the Final Conflagration.

Which means ALL the works of men that were shot up into space will come back one day to below this 29,050 ft boundary in order to burn up in the Fire of the Final Conflagration.

Brought back by the Agency of the Angels.

Article 1. Whether the world is to be cleansed?

Objection 1. It would seem that there is not to be any cleansing of the world. For only that which is unclean needs cleansing. Now God's creatures are not unclean, wherefore it is written (Acts 10:15): "That which God hath cleansed, do not thou call common," i.e. unclean. Therefore the creatures of the world shall not be cleansed.

Objection 2. Further, according to Divine justice cleansing is directed to the removal of the uncleanness of sin, as instanced in the cleansing after death. But there can be no stain of sin in the elements of this world. Therefore, seemingly, they need not to be cleansed.

Objection 3. Further, a thing is said to be cleansed when any foreign matter that depreciates it is removed therefrom: for the removal of that which ennobles a thing is not called a cleansing, but rather a diminishing. Now it pertains to the perfection and nobility of the elements that something of a foreign nature is mingled with them, since the form of a mixed body is more noble than the form of a simple body. Therefore it would seem nowise fitting that the elements of this world can possibly be cleansed.

On the contrary, All renewal is effected by some kind of cleansing. But the elements will be renewed; hence it is written (Apocalypse 21:1): "I saw a new heaven and a new earth: for the first heaven and the first earth was gone." Therefore the elements shall be cleansed.  Further, a gloss [St. Augustine, De Civ. Dei xx, 16 on 1 Corinthians 7:31, "The fashion of this earth passeth away," says: "The beauty of this world will perish in the burning of worldly flames." Therefore the same conclusion follows.

I answer that, Since the world was, in a way, made for man's sake, it follows that, when man shall be glorified in the body, the other bodies of the world shall also be changed to a better state, so that it is rendered a more fitting place for him and more pleasant to look upon. Now in order that man obtain the glory of the body, it behooves first of all those things to be removed which are opposed to glory. There are two, namely the corruption and stain of sin--because according to 1 Corinthians 15:50, "neither shall corruption possess incorruption," and all the unclean shall be without the city of glory (Apocalypse 22:15)--and again, the elements require to be cleansed from the contrary dispositions, ere they be brought to the newness of glory, proportionately to what we have said with regard to man. Now although, properly speaking, a corporeal thing cannot be the subject of the stain of sin, nevertheless, on account of sin corporeal things contract a certain unfittingness for being appointed to spiritual purposes; and for this reason we find that places where crimes have been committed are reckoned unfit for the performance of sacred actions therein, unless they be cleansed beforehand. Accordingly that part of the world which is given to our use contracts from men's sins a certain unfitness for being glorified, wherefore in this respect it needs to be cleansed. In like manner with regard to the intervening space, on account of the contact of the elements, there are many corruptions, generations and alterations of the elements, which diminish their purity: wherefore the elements need to be cleansed from these also, so that they be fit to receive the newness of glory.

Reply to Objection 1. When it is asserted that every creature of God is clean we are to understand this as meaning that its substance contains no alloy of evil, as the Manichees maintained, saying that evil and good are two substances in some places severed from one another, in others mingled together. But it does not exclude a creature from having an admixture of a foreign nature, which in itself is also good, but is inconsistent with the perfection of that creature. Nor does this prevent evil from being accidental to a creature, although not mingled with it as part of its substance.

Reply to Objection 2. Although corporeal elements cannot be the subject of sin, nevertheless, from the sin that is committed in them they contract a certain unfitness for receiving the perfection of glory.