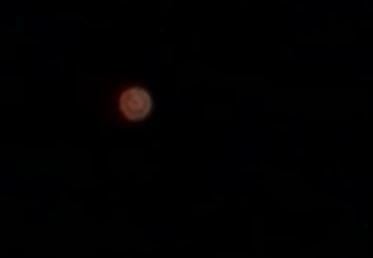 “May the Pope guard against the performers of miracles. For the time has come when the most astonishing wonders will take place on the earth and in the air.Our Lady of La Salette 19 Sept. 1846 (Published by Mélanie 1879)

Not a UFO but Demons of the Darksome Atmosphere....

A South Carolina woman says she filmed a possible UFO off South Carolina’s Kiawah Island on Christmas Eve, and other witnesses are stepping forward on social media to report they saw the same “beautiful red sphere.”  “I’m not a nut,” wrote Debra Thompson in a YouTube post with the video. “...I just wanted to know if anyone has had any experiences in the last few days...It really is quite amazing when you see one that seems to ‘splat’ out of another dimension and change into a round shape.”  Kiawah Island is just off the South Carolina coast, about 25 miles south of Charleston.  Thompson says in the video that she spotted the object about 9:30 p.m. on Christmas Eve as she stood on the deck of her home. One five-minute video shows “an extraordinarily bright and beautiful” red ball as it bounces, stops, fades and then grows brighter.  “What the hell is that?...It looks like fire in the sky,” Thompson says in the video. “That’s so weird. It just seems like it’s observing....I don’t think it’s some kid’s toy and I know it’s not an airplane.”  Source

“The great chastisement will come, because men will not be converted; yet it is only their conversion that can hinder these scourges. God will begin to strike men by inflicting lighter punishments in order to open their eyes; then He will stop, or may repeat His former warnings to give place for repentance. But sinners will not avail themselves of these opportunities; He will, in consequence, send more severe castigations, anxious to move sinners to repentance, but all in vain. Finally, the obduracy of sinners shall draw upon their heads the greatest and most terrible calamities. Mélanie

“We are all guilty! Penance is not done, and sin increases daily. Those who should come forward to do good are retained by fear. Evil is great. A moderate punishment serves only to irritate the spirits, because they view all things with human eyes. God could work a miracle to convert and change the aspect of the earth without chastisement. God will work a miracle; it will be a stroke of His mercy; but after the wicked shall have inebriated themselves with blood, the scourge shall arrive Mélanie

"I protest highly against a different text, which people may dare publish after my death. I protest once more against the very false statements of all those who dare say and write First that I embroidered the Secret; second, against those who state that the Queen Mother did not say to transmit the Secret to all her people." Mélanie
at January 03, 2019