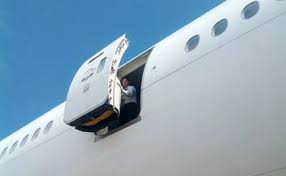 In a scary pre-flight turn of events, Air India flight attendant Harsha Lobo fell out of a plane before it was set to take off.

Lobo, 53, was seriously injured when she fell from the plane while closing the back door of a Boeing 777 as AI Flight 864 prepared to depart Mumbai for New Delhi, senior airline manager Pravin Bhatnagar told the Agence France Press wire service.

According to Boeing technical manuals, depending on the model, the aft door on a 777 can be between 17½ to 18 feet off the ground. (For comparison's sake, that's a little more than half the height of the highest Olympic diving platform.)

"In an unfortunate incident, one of our cabin crew (members), Harsha Lobo, fell down on the tarmac from the Boeing 777 aircraft door while closing it," the airline later told India's Press Trust news service in a statement. "She sustained injuries to her legs and has been taken to the Nanavati Hospital for further treatment."

The airline is currently investigating the incident.

Her fall comes less than a week after a jet from Air India's low-cost Express airline hit a wall during takeoff from Trichy in the southern state of Tamil Nadu, shredding the Boeing 737's underbelly. Source