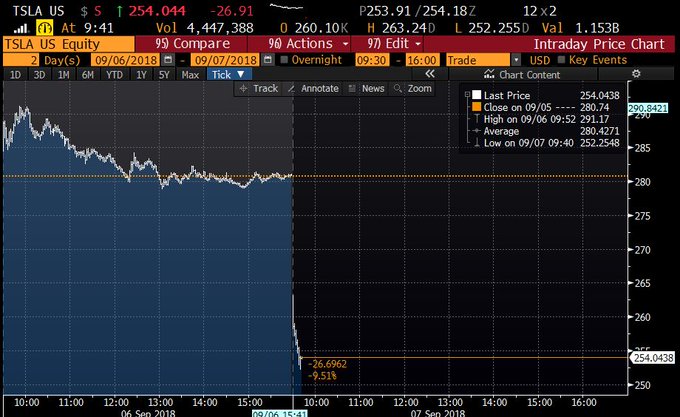 Tesla’s Chief Accounting Officer Dave Morton has resigned from the embattled electric vehicle company, citing unsought levels of “public attention placed on the company.” “Since I joined Tesla on August 6th, the level of public attention placed on the company, as well as the pace within the company, have exceeded my expectations,” Morton, who joined Tesla just one month ago, said in a statement. “As a result, this caused me to reconsider my future. I want to be clear that I believe strongly in Tesla, its mission, and its future prospects, and I have no disagreements with Tesla’s leadership or its financial reporting.”  Moments after Morton’s resignation, Tesla’s Chief People Officer Gaby Toledano announced she would not be returning to the company after taking a 15-month leave of absence August 15.     Shares of the car company tumbled 9 percent premarket. Currently, shares are down 10%, the biggest daily $TSLA loss since 2016. Source