Possessed Man Smears Shit All Over Plane: United Airlines Flight Had To Be Diverted To Anchorage 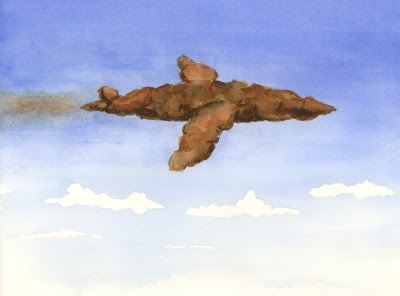 Smearing Shit all over the plane....


There were sure to be some unhappy travelers Thursday night when a United Airlines flight had to be diverted to Anchorage due to the actions of a passenger on board. United Airlines flight 895 from Chicago to Hong Kong had to be redirected to Anchorage Thursday due to a "passenger smearing feces everywhere", according to Ted Stevens International Airport Police. Airport Police say the adult male smeared the excrement within a couple of bathrooms, took off his shirt and attempted to stuff it in the toilet. He was cooperative with the flight crew and was seated when the flight landed in Anchorage. According to FlightAware.com, the plane arrived at ANC around 6:20. The passenger was met by FBI agents and Airport Police at the plane and was interviewed by both entities. Airport Police say the subject was taken to Providence Hospital for a psych evaluation. No charges were filed. The FBI says they're investigating the incident in conjunction with Airport Police. Airport Operations says the Boeing 777 is grounded overnight for maintenance. United Airlines has not yet responded to requests for comment. Source

Unless of course the shit smearer was possessed by demons of the Darksome Atmosphere..