Pope Francis Performs First Ever Sacrament Of Matrimony In The Habitat Of Demons of The Darksome Atmosphere!

OK the Pope has taken this to a new level.

Can you name one Sacrament that was performed 15 cubits above the Mountain tops?

This is the first time a Pope or any Priest dared to perform a Sacrament in the Habitat of Demons.

Men are not allowed to go above 15 cubits above the Mountain tops.

No Good will come of this.

ON BOARD THE PAPAL PLANE - There’s never a dull moment with the whirlwind that is Pope Francis, who has many times been labeled the pope of firsts: On board the Airbus 321 going from Santiago to the northern city of Iquique in Chile, he married a couple that asked for his blessing. Paula Podest, 39, and Carlos Ciufardi, 41, have been together for over ten years. They met in the air, where she was his boss as a flight attendant for LATAM, Chile’s flagship airline. They have been civilly married since 2010. Days before they were scheduled to have their church wedding, an earthquake destroyed the church where they were supposed to marry. On Thursday, as they were posing with Francis and the rest of the crew for the official picture, Francis asked them if they were married in the Church. They told him no, and the pontiff immediately took charge, asking them if they wanted him to marry them, and they agreed. Source 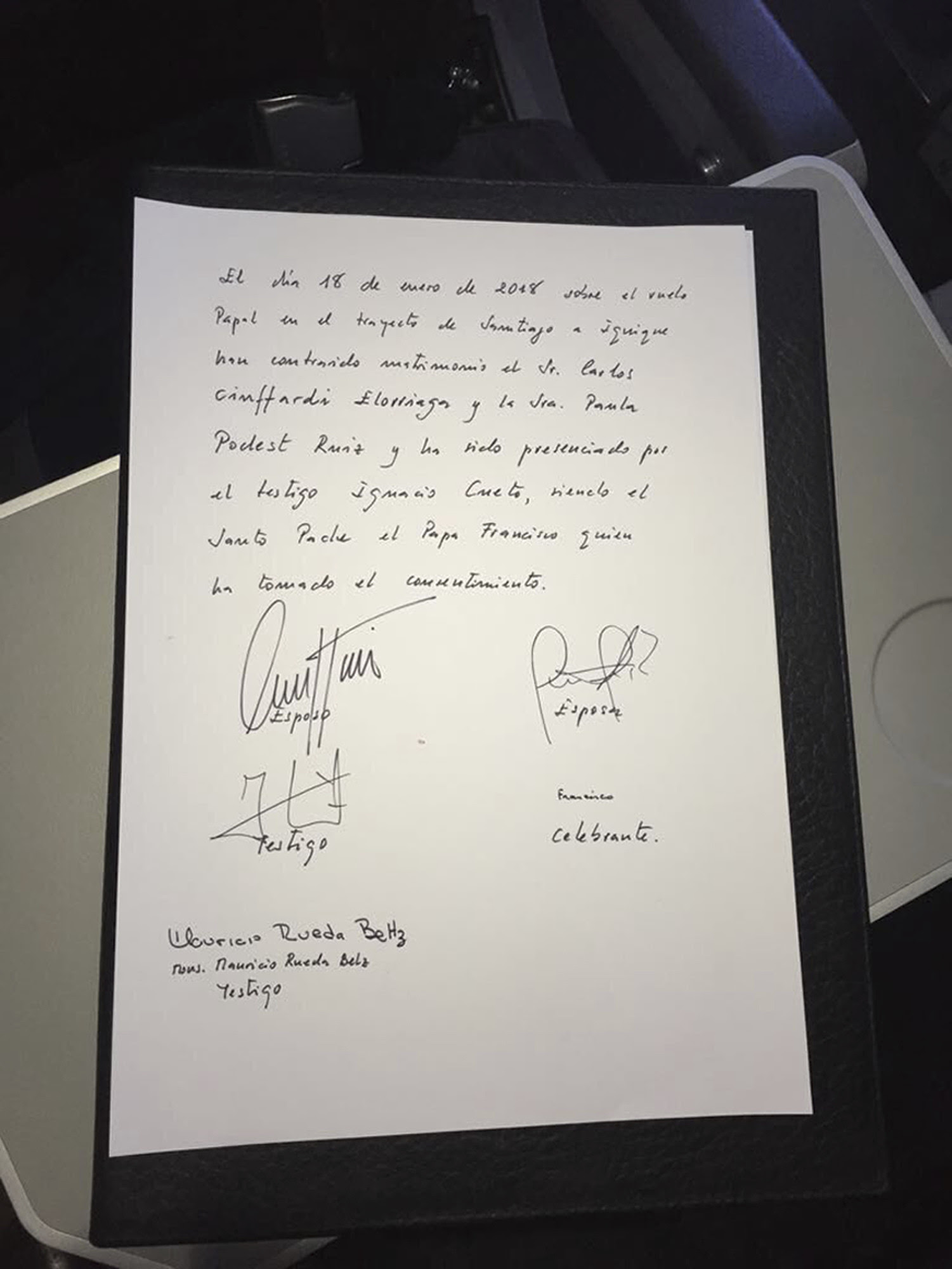 I call doom for the couple

I call doom for the Airline

I call doom for the Pope

I still say that Pope Francis will be the first Pope to perish in an airplane crash.

Here, for the lot of you world travelers read from a Saint on where the Demons reside & ask yourself if God will ever punish a Pope for flying in the Habitat of demons:

Consequently, it must be said that, although a heavenly place belongs to the glory of the angels, yet their glory is not lessened by their coming to us, for they consider that place to be their own; in the same way as we say that the bishop's honor is not lessened while he is not actually sitting on his throne. In like manner it must be said, that although the demons are not actually bound within the fire of hell while they are in this dark atmosphere, nevertheless their punishment is none the less; because they know that such confinement is their due. Hence it is said in a gloss upon Jc 3,6: "They carry fire of hell with them wherever they go." Nor is this contrary to what is said (Lc 8,31), "They besought the Lord not to cast them into the abyss"; for they asked for this, deeming it to be a punishment for them to be cast out of a place where they could injure men. Hence it is stated, "They [Vulg. 'He'] besought Him that He would not expel them [Vulg. 'him'] out of the country" (Mc 5,10).
at January 19, 2018