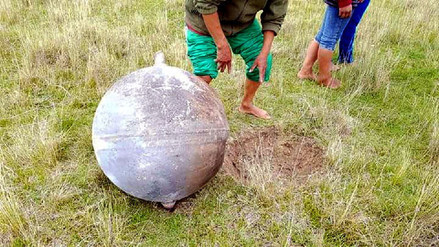 Mystery as three huge steel spheres fall from sky leaving thousands terrified [Peru]
EXPERTS are baffled after large steel balls appeared to fall from the sky, terrifying thousands living in nearby neighbourhoods. Reports have emerged that the mysterious object disintegrated above eastern Brazil and northern Peru. The bizarre incident was accompanied with loud booms. People living in Larancahuani, in the region of Puno, Peru, were reportedly left terrified when three metallic spheres crashed down.
at January 31, 2018

“May the Pope guard against the performers of miracles. For the time has come when the most astonishing wonders will take place on the earth...