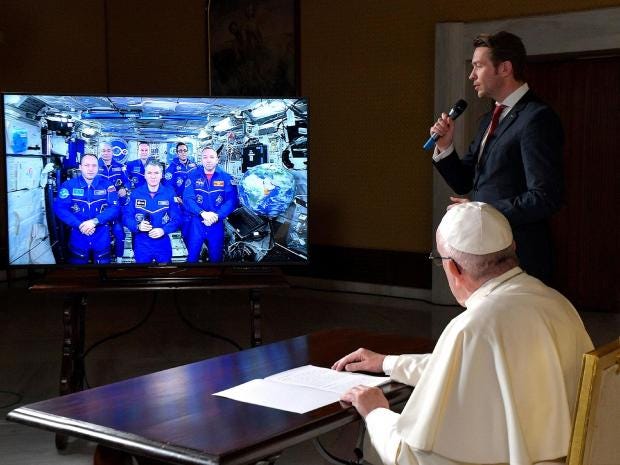 Pope Francis took a small step toward improved Vatican-Russian relations Thursday when he chatted with Russian cosmonauts and praised their understanding of love during a telephone call with the International Space Station.  Italian astronaut Paolo Nespoli played translator during the roughly 20-minute call that was interrupted once when the line dropped at the orbiting laboratory.  Like a curious child, Francis peppered Nespoli and the five other crew members with questions as simple as what they liked to do in space, what surprised them most, and what inspired them to become astronauts. Source

Then a few hours later a strange event occur in the skies over Russia.

Doom faster than I expected - and not what I expected.

This is the Doom or sign that took place after the Pope made a phone call to space:

'I thought it was the end of the world': Enormous glowing ball over northern Siberia sparks UFO fears, while others suggest that Putin is behind it

Russia has been hit by a wave of reports of a giant UFO in the sky last night with spectacular pictures of an enormous glowing ball illuminating northern Siberia. Social media erupted with claims of 'aliens arriving' and locals in far flung parts of the country told of 'shivers down their spines'. While the source of the light remains unclear, some have suggested that it was the the trace of a rocket launched by the Russian military that caused this extraordinary phenomenon in the night sky. Source

Who performed this wonder? or what caused this event?

Here let Mélanie of La Salette & St Thomas explain it to you:

“The demons of the air together with the Antichrist will perform great wonders on earth and in the atmosphere. Our Lady of La Salette 19 Sept. 1846 (Published by Mélanie 1879)

“Everywhere there will be extraordinary wonders, as true faith has faded and false light brightens the people Our Lady of La Salette 19 Sept. 1846 (Published by Mélanie 1879)

Putin or Demons of the Darksome Atmosphere? Take your pick.

"I protest highly against a different text, which people may dare publish after my death. I protest once more against the very false statements of all those who dare say and write First that I embroidered the Secret; second, against those who state that the Queen Mother did not say to transmit the Secret to all her people." Melanie
at October 27, 2017