British Airways DOOM! Will You Pray For The Destruction Of The Airline Industry Tomorrow During Sunday Mass? Did you pray for the destruction of the Airline Industry during Ascension Thursday Mass?

Well you get a chance to pray this Sunday because Ascension Thursday is now on Sundays! Thanks to JPII.

Here's what happened after praying for the destruction of the Airline Industry on Ascension Thursday:

Following the major IT system failure experienced earlier today, with regret we have had to cancel all flights leaving from Heathrow and Gatwick for the rest of today, Saturday, May 27.

We are working hard to get our customers who were due to fly today onto the next available flights over the course of the rest of the weekend. Those unable to fly will be offered a full refund.

The system outage has also affected our call centres and our website but we will update customers as soon as we are able to.

Most long-haul flights due to land in London tomorrow (Sunday, May 28) are expected to arrive as normal, and we are working to restore our services from tomorrow, although some delays and disruption may continue into Sunday.

We will continue to provide information on ba.com, Twitter and through airport communication channels.

We will be updating the situation via the media regularly throughout the day.

We are extremely sorry for the inconvenience this is causing our customers during this busy holiday period.

If you would like to continue please click on one of the following links, otherwise please visit us again later 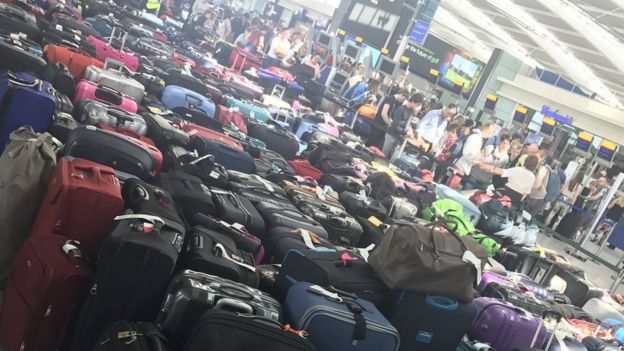 British Airways: All flights cancelled amid IT crash

British Airways has cancelled all flights from Heathrow and Gatwick amid global problems with its IT systems. A "major IT system failure is causing very severe disruption to our flight operations", the airline said. It apologised and said there was no evidence of a cyber attack. BA chief executive Alex Cruz said: "Our IT teams are working tirelessly to fix the problems. We believe the root cause was a power supply issue." He added: "I am really sorry we don't have better news as yet, but I can assure you our teams are working as hard as they can to resolve these issues."The airline hoped to be able to operate some long haul inbound flights on Saturday, landing in London on Sunday, Mr Cruz added. The GMB union has suggested the failure could have been avoided, had the airline not outsourced its IT work. BA refuted the claim, saying: "We would never compromise the integrity and security of our IT systems". BBC>>>>> 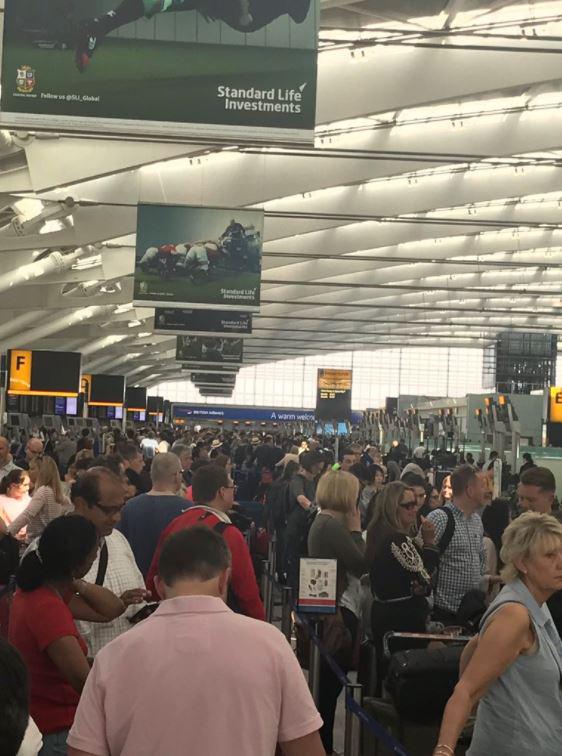 BRITISH Airways have cancelled all flights from Heathrow and Gatwick airports until 6pm after their computer systems were brought down across the entire world. Passengers trying to travel on Bank Holiday weekend were left stranded in terminals with huge queues forming inside and outside airport buildings on one of the hottest days of the year so far in the UK.Angry fliers took to  social media and complained about how they have missed flights,  are stuck on the tarmac and can't use the airline's app or website.  There were reports of BA staff telling disgruntled passengers trying to get away for the Bank Holiday weekend that the company was under cyber attack but this has been denied by the airline.  Passenger Jo Josson said: "Officials are telling us there has been a cyber attack against BA's systems. Even the tannoy is affected." Sun>>>>>> 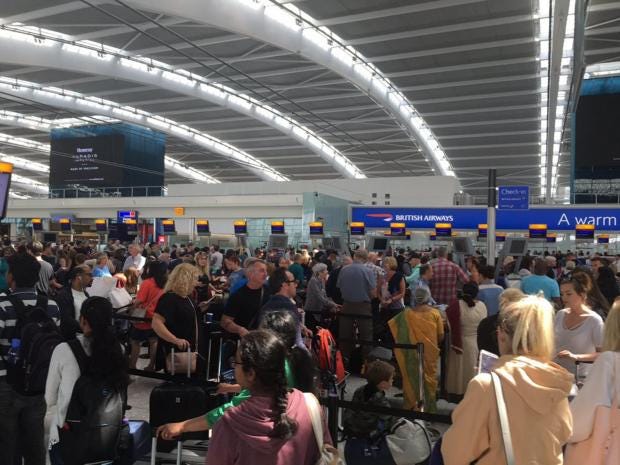 'It's carnage': British Airways computer systems crash across the WORLD after they are 'hacked' sparking chaos at airports with all flights from Gatwick and Heathrow cancelled

Passengers are facing massive flight delays after British Airways computer systems crashed across the world ahead of the Bank holiday weekend,  All BA flights from Heathrow and Gatwick before 6pm have been cancelled because of a 'major IT system failure' that is causing 'severe disruption worldwide'.  One frustrated passenger at Heathrow Airport said customers were told their flight to Stockholm would not be rescheduled and they would have to re-book a new flight online. Hundreds of fliers are stuck in 'huge' check-in lines and parts of BA's website and app are not working - causing people trying to check-in online to miss their flights. Several passengers reported that the captain and gate staff at Gatwick Airport said the airline could be under a cyber attack. Furious fliers in the UK, the US, Rome, Belfast and Lisbon among other locations vented that they have been stuck on their plane for more than two hours. They spoke of 'disgraceful' customer service as staff gave out 'no information', while others said it was 'carnage' at Heathrow Airport's Terminal 5 and warned travellers to stay away. The airline said it was 'experiencing a global system outage' and told passengers not to travel to London airports on Saturday due to 'extreme congestion'.  Daily Mail>>>>> 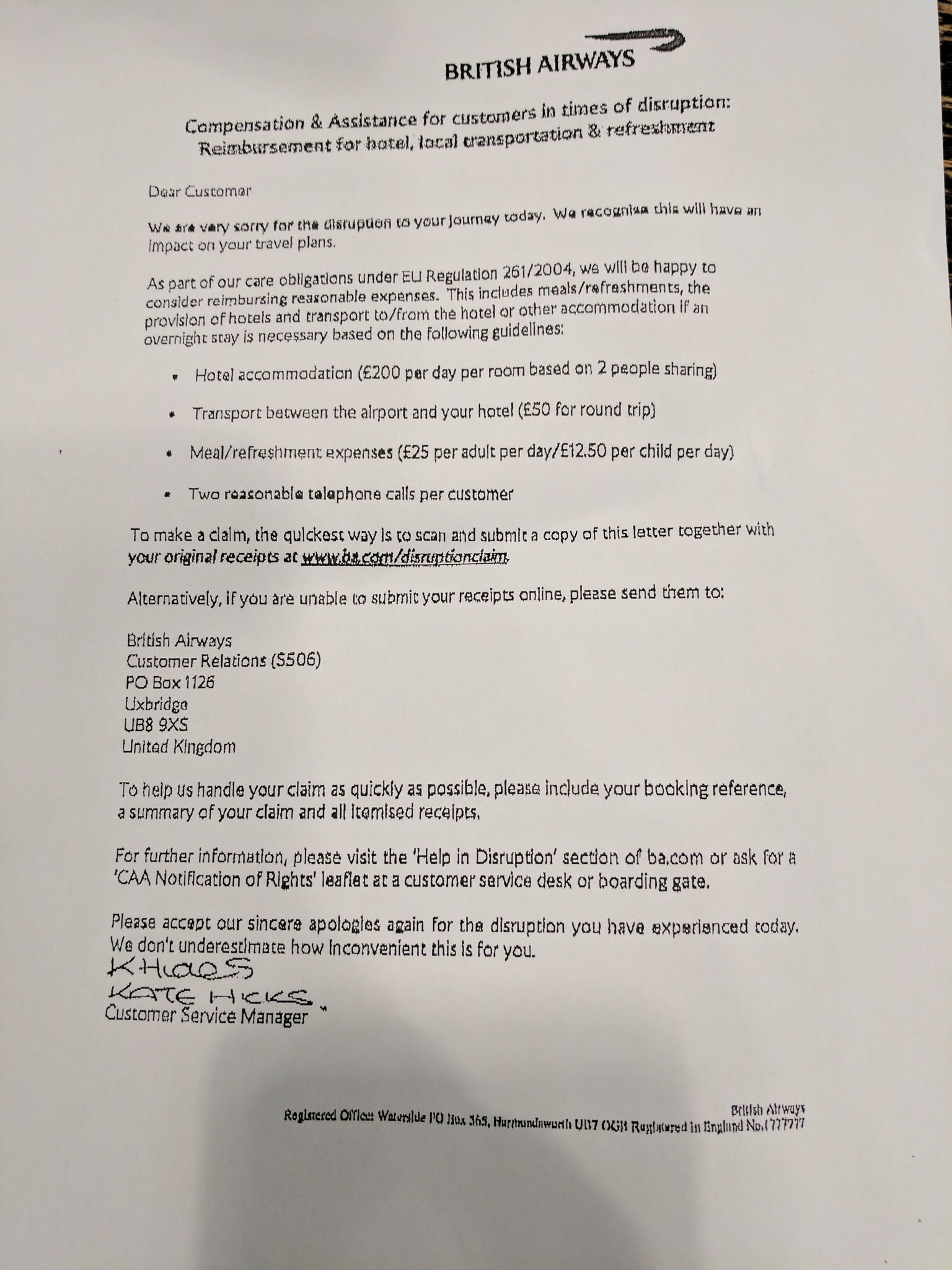