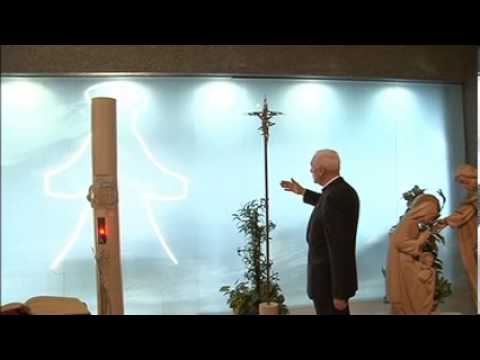 The Chapel Of The Madonna Of Loreto At Malpensa Airport

Didn't the house of Loreto escape the clutches of the Muslims by flying to Italy?

Now the house is given to the Muslims by the Churchmen?

Actually this is a good thing. The Chapel Of The Madonna Of Loreto will be stripped of every Catholic item and turned back into just another room at the Airport.

As was said last month - Catholics are under the mistaken impression that Madonna Of Loreto is somehow the patroness of air travelers, because the house of Loreto flew all the way to Italy.

Problem with this is that the House of Loreto did not fly above the boundary established by the Blessed Trinity that man is not suppose to cross over and that is 15 cubits above the Mountain tops or 29,050ft and this level is the same level that the waters of the deluge reached to cleanse the world of sin in the time of Noe and this boundary is the same that the fire of the final conflagration will rise up to at the end of days to cleanse the world of all of the works of men before the general judgment.

Of course all the works of men will be subject to this fire of the final conflagration including all of the space works shot above this 29,050ft boundary.

More on why this move by the Chaplain is a good and holy thing:


Originally published Friday, December 16, 2016 Our Lady of Loreto is the Patroness of St Thomas Aquinas Versus NASA Blog

Now for the news on the Chapel Of The Madonna Of Loreto that is no longer:

It is undoubtedly a gesture of good will, but it might also be a colossal mistake. We are talking about the initiative by Malpensa’s chaplain who decided to place the Chapel of Our Lady of Loreto at the disposition of Muslims for their prayers.

We read of the initiative here: (click here); it seems to be well-intentioned, but perhaps not very wise

Let’s try to explain why.

The place a Muslim community prays becomes Dar al-Islam, the house of Islam; a place that will always be the property of the Prophet’s followers. Not like the rest of the world -- the west in particular -- which is Dar al-harb, the house of war, i.e. land to conquer for the true faith.

And it is precisely for this reason that when the Saladin conquered Jerusalem and visited the Church of the Holy Sepulchre, he did this: he had the Cross destroyed, and the bells broken but didn’t want to pray inside*, specifically to avoid the Sepulchre becoming Dar al – Islam. In fact he wanted it to remain a place of Christian pilgrimage (also for economic reasons, it seems: the pilgrims brought good business).

It is not by chance that the Italian Bishop’s Conference wrote this in its pastoral document:

“So as to avoid useless misunderstandings and confusion, the Christian community, must not place churches, chapels and places reserved for Catholic worship at the disposition of non–Christian faiths for religious meetings, as well as places destined for parish activities. Likewise, before promoting religious cultural initiatives or prayer meetings with non-Christians, careful consideration about their significance is required and the guaranteeing of a correct style of interreligious relations, following the dispositions of the local church.”

In fact, in recent months, at a high level meeting with the Pope and his collaborators, the problem of dialogue with Islam and its multiple aspects was discussed. The head of an important ministry, who has great experience in the matter of the Islamic world, said that we need to caution our pastoral workers, who perhaps naively lend out churches and halls. In the collective memory of the Islamic faithful, this data remains; and may become object of a claim in a more or less distant future.

So perhaps if there is a Bishop in Milan, he ought to do something to put the Chaplain’s good intentions in order ...