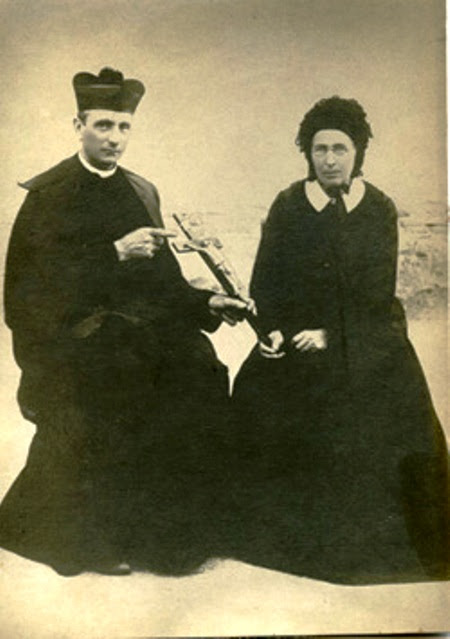 Why good Catholics are just as bad as bad Catholics when violating God's laws by flying above 29,05ft:

People will be transported from one place to another by these evil spirits, even priests, for they will not have been guided by the good spirit of the Gospel which is a spirit of humility, charity and zeal for the glory of God Our Lady of La Salette 19 Sept. 1846 (Published by Mélanie 1879)

At first I always believed that the best way to interpret

would be that men would actually be carried by evil spirits.

Now I have come the conclusion that with these above words, Melanie prophesied modern day air travel, because air travel violates God's law & places man near the Habitat of Demons of the Darksome Atmosphere, thus:

So its not that Demons physically grab men by the hairs and transport them from one place to another, but that men using free will decide to fly on planes which travel above 29,050ft and places man in close proximity to the Demons of the Darksome Atmosphere.

All of the arguments for this, on why man should not travel above 29,050ft is found in the the Summa of St. Thomas Aquinas,

Two reasons found in the Summa of St. Thomas Aquinas why man is not allow above 29,050ft boundary:

1. Question 74. The fire of the final conflagration
2. Question 64. The punishment of the demons
I hope you study the above from St Thomas and do your best to refute what I have written - but I know you either won't read St Thomas or you will not be able to refute what I've written on warning souls not to fly until the airline industry agrees to fly below the 29,050 ft boundary established by the Blessed Trinity.

Until the Airline Industry changes their ways there will be many deaths from plane crashes and many deaths on flights and increased bizarre air rage and other strange events surrounding air travel - to the point where many will no longer fly and the airline industry will lose money......

I boarded the plane and took my seat. An older, rather heavy-set Italian who looked like he’d eaten his fair share of pasta sat down next to me. We exchanged greetings, and he introduced himself as an official of the former Pontifical Council for the Family, headed by Archbishop Vincenzo Paglia.

The official seemed to feel quite free to speak, and was keen to express that he knew Cardinal Lorenzo Baldisseri, secretary general of the Synod of Bishops. There were a couple of moments during our conversation when he admitted he had spoken at length to Cardinal Baldisseri, but he could not reveal the contents of their conversation.

Our conversation quickly turned to the upcoming Synod. I simply asked questions and was sincerely listening and interested in his viewpoint. Also on this account, I think he felt free to speak. The beginning of our conversation focused a lot on the Kasper proposal,* and I was trying to understand the logic behind it.

Response: What do you do when the indissolubility is dead, when there’s no more feeling?

I thought to myself: This is the last thing a priest should say to a newly married couple who is experiencing difficulty.

After some back and forth, I asked:

Question: But what about Pope John Paul II’s Familiaris Consortio, 84?**

Response: How can we accept [“ammettere”] it? It was written 30 years ago …

Question: But what about where Pope John Paul II says, in FC 84, that according to the Sacred Scripture and Tradition, someone who’s first marriage is valid and who is in a second union can’t be admitted to Holy Communion unless they live as brother and sister.

Response: We can’t expect a man and woman who are sleeping in the same bed to live as brother and sister.

Our conversation turned to some of the people the Pope had appointed to the Synod.

Question: The Pope chose Cardinal Kasper to attend the Synod. Do you think this means the Pope agrees with Kasper?

Question: What do you think of Kasper?

Response: “He’s the most intelligent man in the room.”

Response: [Quickly he said] He’s not coming. He doesn’t count for anything; he’s too Lefebvrist. [“Non conta per niente; è troppo Lefebvrista”]

Question: But I imagine there will be a lot of opposition from some of the bishops and cardinals at the Synod, especially from Africa, America, Poland. What will Pope Francis do?

Response: “He will listen, and then he’ll do what he wants.”

Question: But what about Pope Benedict? I don’t imagine he would agree.

Response: He’s a theologian, but he’s got no pastoral experience.

Question: And the Congregation for the Doctrine of the Faith?

Question: I heard that the Pope appointed Cardinal Danneels*** to attend the Synod …

Our conversation eventually turned to other more benign topics, then ended until we arrived in Rome. When we landed, he gave me his name and telephone number Lifesite