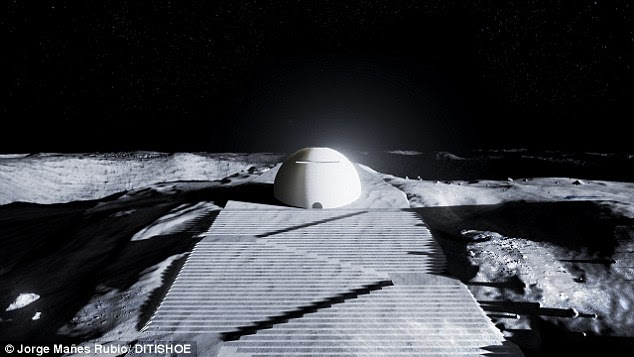 “Evil books will be abundant on earth and the sprits of darkness will spread everywhere a universal slackening of all that concerns the service of God. They will have great power over Nature: there will be churches built to serve these spirits. People will be transported from one place to another by these evil spirits, even priests, for they will not have been guided by the good spirit of the Gospel which is a spirit of humility, charity and zeal for the glory of God. Our Lady of La Salette 19 Sept. 1846 (Published by Mélanie 1879)

ESA has plans to build a Temple on the Moon to serve these evil spirits that Our Lady warned about.


It could be a temple like no other - and with a view that really is out of this world. The European Space Agency has revealed plans for a lunar temple to be built alongside mankind's first outpost on the moon. The 50m high dome, close to a planned moonbase near to the moon's south pole, would give the first settlers 'a place of contemplation'. Artist Jorge Mañes Rubio, part of ESA's future-oriented Advanced Concepts Team (ACT), designed the temple to be built alongside ESA's planned moonbase.'I've been having all sorts of discussions with my ACT colleagues, including speculating on the likely needs of future lunar settlers,' said Jorge. 'What kind of social interactions will they share, what cultural activities and rituals will they have, and what sort of art and artefacts will they be producing? 'Humans have been creating art for at least 30 000 years, so I have no doubt this will continue in space and on the Moon.'  Daily Mail Read More>>>>>>>>