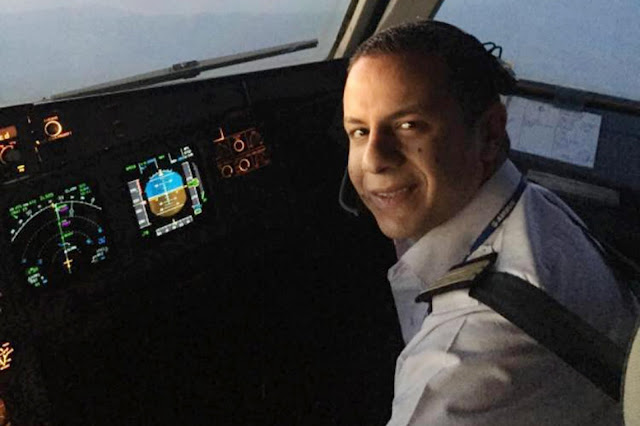 EGYPTAIR resource stated that the Egyptian Ministry of Civil Aviation has just received an official letter from the Egyptian Ministry of Foreign Affairs declaring the finding of wreckage of the missing aircraft No. MS 804 near Karpathos Island. EGYPTAIR sincerely conveys its deepest sorrow to the families and friends of the passengers onboard Flight MS804. Family members of passengers and crew have been already informed and we extend our deepest sympathies to those affected. Meanwhile, the Egyptian Investigation Team in co-operation with the Greek counterpart are still searching for other remains of the missing plane. For more information,please call 080077770000 within Egypt Or +20225989320 international طائرة مصر للطيران المفقودة رحلة رقم804 المتجهة من باريس الى القاهرة
20/05/2016


In the U.S., the FBI offered its assistance in the investigation. FBI Director James Comey said the bureau has no evidence yet that the plane was brought down intentionally.

That leaves the Pilot and co-pilot as prime suspects in deliberately downing the plane:


The jetliner, an Airbus A320, departed Paris at 11:09 p.m. on Wednesday. The pilot spoke to Greek air traffic controllers at 2:26 a.m. and nothing seemed out of the ordinary, officials said. Three or four minutes later, the plane made its last normal radar contact.

At 2:37 a.m., shortly after entering Egyptian airspace, the plane made a 90-degree turn to the left and then a full circle to the right, first plunging to 15,000 feet from 37,000 feet and then to 9,000 feet. At that point it disappeared from radar, the Greek defense minister, Panos Kammenos, said at a news conference on Thursday afternoon. NYT


Egypt's state-run al-Ahram newspaper identified the pilot as Captain Mohamed Shokeir. EgyptAir said he had had 6,275 hours of flying experience, including 2,101 hours on the A320, while the first officer had had 2,766 hours.


All EgyptAir Flight 804 Pilot Wanted Was to Fly

Mohammad Mamdouh Assem, whose plane crashed into the Mediterranean early Thursday, had dreamed of being a pilot since he was 5. Friends remember him and the other victims. For EgyptAir Flight 804 co-pilot Mohammad Mamdouh Assem, becoming a pilot was a lifelong dream. His father works as a flight crew member for the same airline, whose plane carrying 66 people crashed early Thursday 170 miles off the coast of Egypt, in what U.S. officials are saying was likely a terrorist bombing. Assem grew up looking up to his dad. “He wanted to be a pilot since he was 5,” childhood friend Omar Nasef told The Daily Beast. “He was an unbelievable person, social.” Assem’s mother, Mona, taught at Nasef’s primary school in Cairo but passed away from cancer a few years ago. When Nasef connected with Assem’s father in New York a few months ago, he said the family was still reeling from that loss. “His mom put all her savings towards his education,” Nasef said. “The academy and all that, and it’s very expensive in Egypt. That was a big sacrifice.” “All that I know is that he loved flying,” Nasef added. “That was his dream job and that’s it.”  Daily Beast

More evidence mounting that the Muslim pilot or co-pilot took the plane down:

Mystery of Flight MS804: EgyptAir now say NO wreckage has been found and Pentagon says they have NO indication of an explosion on the plane that 'plunged 22,000ft into the sea with 66 on board'

EgyptAir has tonight retracted its claims that the wreckage of the downed Flight MS804 had been discovered floating in the Mediterranean Sea, as the mystery surrounding the missing passenger jet deepens. It comes as U.S. authorities say they have so far been unable to find any indication that an explosion took place on board the plane before it allegedly plunged 22,000ft into the sea. It comes as international efforts combine to cast light on what happened to the plane, which had 66 people on board, in its final moments.  Daily Mail Read More>>>> 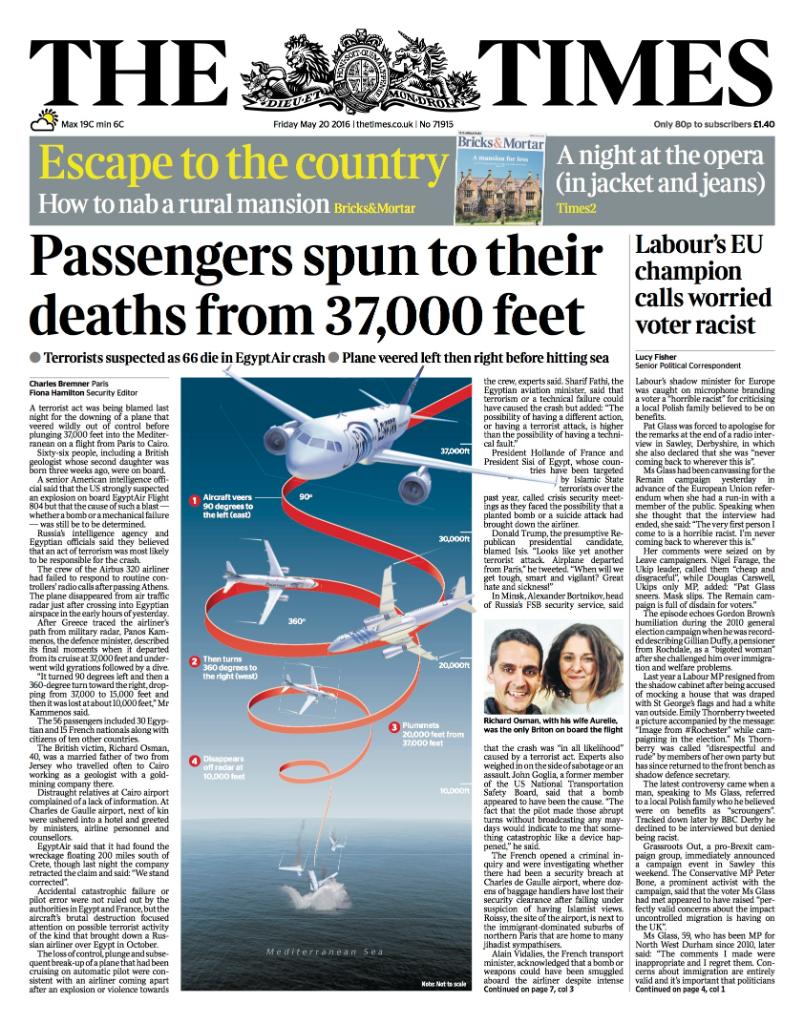