Airlive Twitter Causes Stir Publishing Picture Of Dead Pilot Michael Johnston On Tarmac....Twitter Followers Do Not Want To Be Reminded Of Death!!! 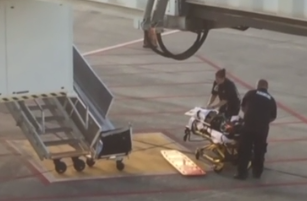 Everyone dies, even you. In today's world, the reality of death is ignored. People get upset when they are reminded of death.

The above photo is of the dead Pilot Michael Johnston:

Here is the story:

BREAKING American Airlines flight #AA550 pilot dies in flight
An American Airlines flight was diverted to Syracuse in New York this morning after the pilot became ill and died, the airline says in a statement. Flight 550, which was flying from Phoenix to Boston, was carrying 147 passengers and 5 crew members. The flight AA550 landed safely when the co-pilot took the control of the aircraft and diverted to Syracuse, New York.

The following are the complaining tweets from those who ignore the reality of death:

@airlivenet Is it really necessary to show the picture? Would be good to afford the Captain and his family some respect and dignity.
— Donald Steel (@LondonDonald) October 6, 2015

@airlivenet This photo is totally unnecessary- you really should remove it. Disrespectful.
— DoorsToManual (@blownslide) October 6, 2015

Those who ignore the reality of death and are complaining of the above photo are the same ones who would place Teddy Bears, Flowers, Candles, Toys etc to mark the scene of some murder so as to put a happy face on death. Back in the day many Holy men meditated on a actual skull to constantly remind them of the reality of death. So in today's world instead of attending the funeral (a real funeral Mass) and remembering the dead in their prayers these poor deluded souls place Teddy Bears, Flowers, Candles, Toys at the scene of death to appease their conscience. Last night on his radio program Dr. Michael Savage mentioned the very same thing about the foolish trend of placing Teddy Bears, Flowers, Candles, Toys at a crime scene instead of  keeping to the good custom of remembering the dead with Funeral Masses, Prayers for the Dead and visits to the grave.

Enough of the Teddy Bears, Flowers, Candles, Toys...these should be banned.