Hey Question - Which One is Stationary? Is The Deep Space Climate Observatory Space Telescope Stationary? The Moon? Or The Earth? LOL!

Which One Is Moving & Which Is Fixed?

Which of the above is stationary? Which two are moving?

Well by looking at the above you would say that the Earth and Moon are moving and the Space telescope is stationary... LOL!

NASA does not have the capabilities to keep DSCOVR is one place.

But God does have the capability to keep the Earth in a fixed place. and that is just exactly what you see in the above.

The moon and the space telescope are moving and the earth is stationary or fixed.

Nasa has captured a beautiful, rare view of the moon passing in front of the sunlit face of Earth. The stunning animation, taken one million miles from Earth, shows the fully illuminated far side of the moon that is never visible from our planet. This is because its position is 'tidally locked, which means that we always see the same face pointing towards Earth, although both sides receive equal amounts of light.The animation was captured by the Earth Polychromatic Imaging Camera (Epic) aboard the Deep Space Climate Observatory (DSCOVR). Epic has a constant view of the fully illuminated Earth as it rotates, providing scientific observations of ozone, vegetation, cloud height and aerosols in the atmosphere. Once Epic begins regular observations next month, the camera will provide a series of Earth images allowing study of daily variations over the entire globe. The images which make up this animation were taken between 3:50 p.m. and 8:45 p.m. EDT on July 16, showing the moon moving over the Pacific Ocean near North America. About twice a year the camera will capture the moon and Earth together as the orbit of DSCOVR crosses the orbital plane of the moon. The North Pole is in the upper left corner of the image, reflecting the orbital tilt of Earth from the vantage point of the spacecraft. Daily Mail Read More>>>>> 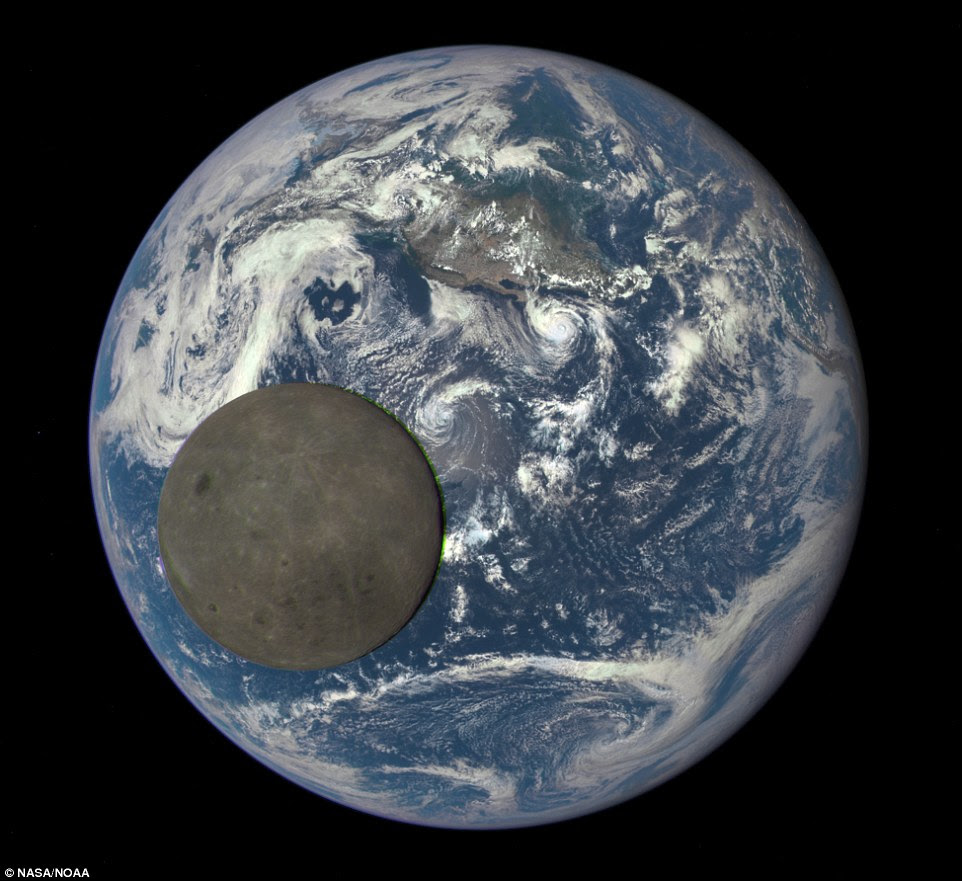