Fr John Zuhlsdorf Advises Performing Exorcisms On Entire Nations To Chase Demons Away BUT REFUSES TO PERFORM EXORCISMS ON PLANES HE FLYS ON!

Fr John Zuhlsdorf is constantly flying from here to there.  He frequently posts on his blog My View For Awhile. Fr. Z usually then posts a pic of the back of the seat in front of him with the book he will read on the flight: 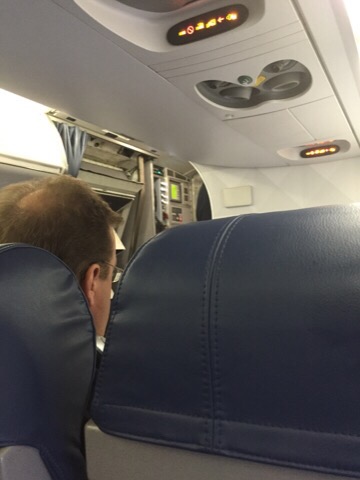 
My View For Awhile: Shore to Shore Edition
Posted on 30 May 2015 by Fr. John Zuhlsdorf
It’s time to leave the shore of Lake Superior for the shore of Lake Michigan. My flight is from Marquette to Milwaukee, where I will pick up my car and head back to Madison, perhaps after an errand or two. Before boarding I had a good chat with the rector of a seminary who was in for the ordination yesterday. Read More>>>>

Granted Fr. Z does not post much on St Thomas Aquinas but I would think the man at least reads the Summa once in awhile so he should be familiar with the Summa. And would think he would have read the questions on Demons.

I bring this up because just today Fr Z posts an interesting post on Priests performing exorcisms on a whole entire Nation.

Here is what he had to say:


Remember when Illinois gave the F-finger to God and passed same-sex marriage? Bp. Paprocki of Springfield performed an exorcism over the state. For which he is to be applauded..... Catholics do not shrink away from or excuse exorcisms or pooh-poo them. We embrace them.  Folks, ask your priests to baptize with the older, traditional form.  The Roman Ritual has exorcisms for places, not just for people. Demons can dominate places because of sins that were committed there. And the places don’t have to be one little patch of ground or room or one building..... I invite all the bishops reading this to consider doing an exorcism over their own dioceses, with the older Roman Ritual.   It doesn’t have to be public.   It doesn’t have to be just one. Read More >>>>

OK so frequent flyer Fr. Z admits that all places can be exorcised by a priest. But does Fr Z. advise that even Airplanes should be exorcised considering that all airplanes that fly over 29,050 ft are flying in the region or habitat of demons?

Here is a list of terminology of how devils can play with you:

Infestation is when a demon is attached to a place or an object. For example, a place where one has committed acts of witchcraft, gross sexual sins, murder, or other grave sins may become infested with demons. Also, objects cursed by a practitioner of witchcraft may become infested with demons. In situations like these, the demon has been given rights over the place or object.

Oppression is when a person is physically or sexually assaulted by demons or even when a person undergoes a series of unfortunate events that can't be attributed to natural causes (e.g., Job).

Obsession is when a person experiences obsessive, depressive or sinful thoughts to an extreme degree, which they cannot control. This is not to be confused with various mental illnesses that can mimic some of the symptoms of obsession. Distinguishing between mental illness and demonic obsession is possible, but it requires time, expertise and wisdom.

The above list is taken from a group of men who I consider my enemy and who know the devil very well and these men are close friends of Fr. Z. CM

Now considering that it is very reasonable that demons can infest places then I would think that demons can infest airplanes as well. Maybe many of the tragic air disasters are the result of demonic infestation?  I would think that many of the souls that exhibit bizarre behavior on flights are also too a result of demonic activity on the poor soul.

Again this field is new - no one understands that the habitat of demons is high in the sky - in the darksome atmosphere.

Any if any religious wants to use what little I have written on this matter or just the idea  please by all means expand on it. There is a danger up there we just do not comprehend it yet.


So here is St. Thomas Aquinas on the habitation of Demons: