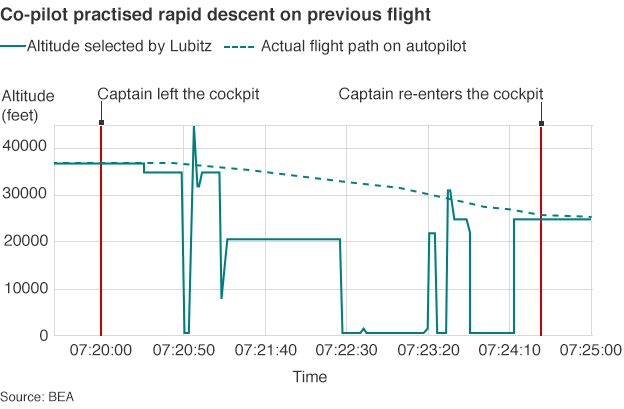 Male, aged 27, German nationality.
Experience:
Flying career:
During his training and recurrent checks, his professional level was judged to be above standard by his instructors and examiners.

On 9 April 2008, he obtained a class 1 medical certificate without restrictions and valid until 9 April 2009, issued by the Lufthansa aeromedical centre.

On 9 April 2009, his class 1 medical certificate was not revalidated by the Lufthansa aeromedical centre due to depression and the taking of medication to treat it.

On 14 July 2009, his request for renewal of his class 1 medical certificate was refused by the Lufthansa aeromedical centre. The latter informed the LBA of this.

On 28 July 2009, he obtained a new class 1 medical certificate valid until 9 April 2010, endorsed with the note ‘‘Note the special conditions/restrictions of the waiver FRA 091/09 -REV-’’. His pilot’s licence then included the limitation ‘‘***SIC**incl. PPL***’’, which means ‘‘Specific regular medical examinations – contact the licence issuing authority’’. This limitation requires that the aeromedical examiner (AME) contact the licence issuing authority before proceeding with a medical evaluation relating to any extension or renewal of the medical certificate. It may relate to the medical history that the AME must be informed of before undertaking an assessment.

From July 2009, he obtained each year a class 1 medical certificate valid for one year that was endorsed with the note ‘‘Note the special conditions/restrictions of the waiver FRA 091/09 –REV -’’.