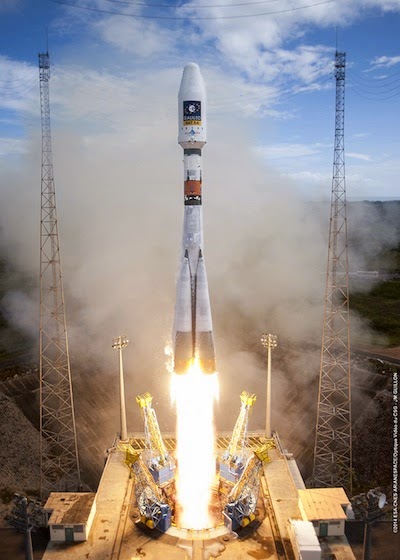 Arianespace confirmed late Friday that two satellites for Europe's Galileo navigation network were released into the wrong orbit after launching aboard a Soyuz rocket from French Guiana. It was not immediately clear whether the two satellites have enough fuel to make up for the orbit injection error. Arianespace and European Space Agency officials initially heralded Friday morning's launch as a success, declaring the satellites healthy and claiming they were deployed into their targeted orbit approximately 23,500 kilometers, or 14,600 miles, above Earth. The Russian-built Soyuz ST-B rocket carrying the Galileo navigation payloads blasted off at 1227 GMT (8:27 a.m. EDT) from the French-run Guiana Space Center in South America. The Soyuz launcher's three booster stages gave way to a Russian Fregat-MT upper stage less than 10 minutes after liftoff. The Fregat was programmed to fire two times to propel the Galileo satellites into a circular medium Earth orbit tilted at an angle of 55 degrees to the equator. But U.S. military orbital tracking data indicated the satellites were flying in a lower orbit than planned. Officials confirmed a launch anomaly in a statement late Friday. "Complementary observations gathered after separation of the Galileo FOC M1 satellites on Soyuz Flight VS09 have highlighted a discrepancy between targeted and reached orbit," Arianespace, the French launch services company, said in a statement. Spaceflight Now Read More>>>>>>