Sierra Leone Woman Dies From EBOLA At Gatwick Airport!! Woe To The Inhabitants Of The Earth! There Will Be Plagues And Infectious Diseases! 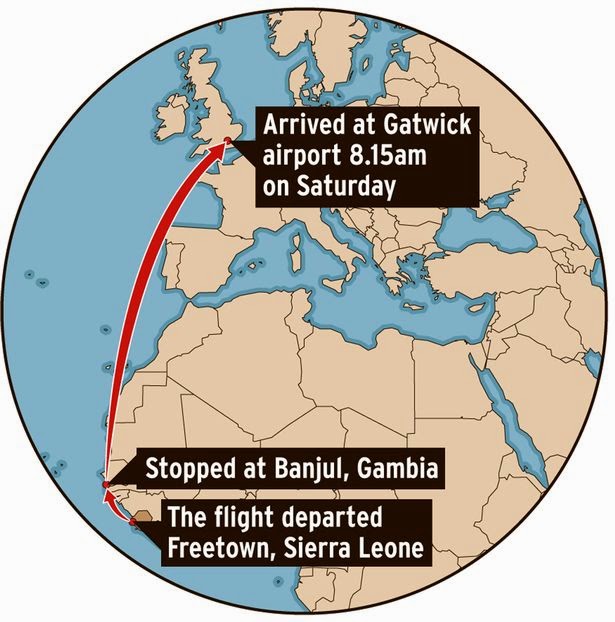 Woe to the inhabitants of the earth! There will be bloody wars and famines, plagues and infectious diseases. Our Lady of La Salette 19 Sept. 1846 (Published by Mélanie 1879)

“The earth will be struck by calamities of all kinds (in addition to plague and famine which will be wide-spread). Our Lady of La Salette 19 Sept. 1846 (Published by Mélanie 1879)

Airport staff tonight told of their fears of an Ebola outbreak after a passenger from Sierra Leone collapsed and died as she got off a plane at Gatwick.

Workers said they were terrified the virus could spread globally through the busy international hub from the West African country which is in the grip of the deadly epidemic.

The woman, said to be 72, became ill on the gangway after she left a Gambia Bird jet with 128 passengers on board. She died in hospital.

Ebola has killed 256 people in Sierra Leone. A total of 826 have died in West Africa since the outbreak began in February. Tests are now being carried out to see if the woman had disease.

The plane was quarantined as ­officials desperately tried to trace everyone who had been in contact with the woman.

Airport workers face an anxious wait to see if the woman had Ebola. One said: “Everyone’s just ­petrified.

“We’ve all seen how many people have died from Ebola, especially in Sierra Leone, and it’s terrifying.”

Speaking of the horrific moment the passenger collapsed, the shocked staff member added: “The woman was sweating buckets and vomiting.

“Paramedics arrived to try and help her. The next thing everybody was there… emergency crews, airfield operations, even immigration.

“They closed down the jet bridge and put the aircraft into quarantine.

“They took everyone’s details, even the guy who fuels the aircraft.”

The plane carrying the woman came from Freetown in Sierra Leone – a country with the highest number of victims from the disease.

It stopped at Banjul in The Gambia before landing in Gatwick at 8.15am on Saturday after a five-hour flight. Public Health England tried to allay fears of an Ebola ­breakout in Britain.

It said the woman showed no ­symptoms during the flight.

One ­official added: “Public Health England is aware a passenger arriving on a flight from The Gambia that landed at Gatwick airport on Saturday fell ill shortly after disembarking.

"The passenger was taken to hospital and sadly died.

“In line with standard ­procedures, tests are being undertaken to determine the cause of death.

“The patient’s symptoms suggest that Ebola is very unlikely but as a precaution this is one of the tests being undertaken.

"The patient was not symptomatic on the plane and therefore there is no risk of Ebola being passed on to either flight crew or other passengers.

“England has world class health care and disease control systems which are active permanently, ­regularly tested and proven to be effective.

“As such, if the UK does see a case of imported Ebola, this will not result in an outbreak in this country.” Mirror Read More>>>>>>>