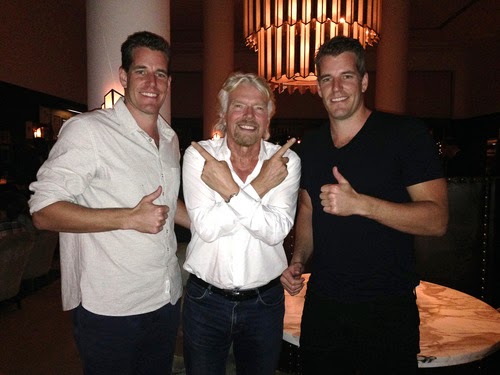 Wow! how's that for timing? Tyler blogged a few days ago that he & his brother are buying tickets to outer space on Sir Richard Branson's space ship with Bitcoins and the friend of Sir Richard - First Meta CEO Autumn Radtke just killed herself!

Bitcoin Space and Beyond
by Tyler Winklevoss - Founder, Winklevoss Capital

Cameron and I have decided to use our bitcoin to take the plunge, or rather propulsion, into space. Why? Because Bitcoin and Sir Richard Branson’s Virgin Galactic are two technologies that meaningfully represent our focus at Winklevoss Capital - the reduction of pain-points and friction in an effort to build a better world.

Humans have a long tradition of exploring and forging new frontiers, both physically and metaphorically. In the Middle Ages, Marco Polo’s writings - which recounted his 24 years of travel and trade on the Silk Road – built a new and lasting level of economic and cultural awareness between Europe and Asia. 200 years later, they would inspire 15th century explorer Christopher Columbus to search for a shorter route to the Far East by sea. While Columbus did not achieve his original goal, he did manage to bring word of a new landmass back to Europe, which planted the seeds of hope and possibility in the minds of persecuted Pilgrims, who fled to and settled North America 100 years later. Such stories of inadvertent and iterated accomplishment are all too familiar in the spheres of exploration and innovation. They demonstrate how the building blocks of human discovery are not necessarily brilliance and perfection, but rather, the courage to fail and persistence to keep on trying.

By the early 16th century, Vasco da Gama would chart a maritime route from Europe to India via the Cape of Good Hope, while astronomer Nicolaus Copernicus would argue that the earth did not stand still, but instead revolved around the Sun and simultaneously its own axis. Ferdinand Magellan’s expedition would successfully circumnavigate the globe, confirming that the world was indeed round, not flat, and shepherd in an epoch of post-medieval thought.

By the close of the 20th century, Robert Peary would reach the North Pole while Roald Amundsen would touch to the South Pole. Taking exploration vertical, Sir Edmund Hillary would summit Mt. Everest, Yuri Gargarin would enter orbit and Neil Armstrong would walk on the moon and take “one giant leap for mankind”. While Sir Ernest Shackleton would fail to traverse Antarctica, his leadership and endurance, against all physical and mental odds, would become a reminder to modern audiences of the indomitable human spirit that necessarily defines the great progress of every age.

Today, I think we can all agree that this spirit is alive and quite well. As we embark on the 21st century, however, the face of exploration has taken on a new look. Grand expeditions and financial systems once commissioned and shaped by the likes of Ferdinand and Isabella, president John F. Kennedy and delegates at Bretton Woods, are now done so by brave citizen entrepreneurs like Elon Musk, Sir Richard Branson and Satoshi Nakamoto. Today, we see an independent technological infrastructure being built that allows these courageous entrepreneurs to risk their greatest human resources – their time, intelligence, extraordinary energy, and hard-earned capital – in modern attempts to achieve the unachievable, unconstrained by the technologies and boundaries of generations past.

Since their inceptions, Bitcoin and Virgin Galactic have been writing the next chapter in our history books. While one is ushering in a new era of post-currency, entirely ledger-based decentralized financial systems, the other is ringing in a new era of post-aircraft, sub-orbital spacecraft-based travel systems. But perhaps the most fascinating part is that Cameron and I are not alone in believing that this is only the beginning. While it is initially exciting to focus on bitcoin (lowercase “b”) the asset and low-earth orbit the experience, it is perhaps more interesting to imagine the possibilities of Bitcoin (capital “B”) the decentralized financial protocol and Virgin Galactic the suborbital space protocol.

It’s impossible to predict exactly what will happen, but if history is any indicator, the sandbox-nature of a viable protocol almost always incubates killer applications. We don’t have to look very far to see the profound impact of protocols like SMTP/IMAP, which gave us email; HTTP, which gave us web pages; and VoIP, which made apps like Skype possible. All of these protocols provided a platform for curious minds to build on top of, and from there, great things followed. Most significantly, they all made previous processes faster, cheaper and more accessible. Think of email (free and instant) vs. the US post office (slow and costly), webpages (free and accessible) vs. Yellow Pages/brochures (costly and inaccessible), or Skype/Viber (virtually free) vs. AT&T landlines (costly).

For a moment, however, let’s consider a few of the possibilities that might be just around the corner. Hypothetically, a natural disaster strikes a remote part of the world during a long holiday weekend. Via the Virgin Galactic platform, emergency responders and volunteers are boots on the ground in less than two hours. Simultaneously, small payload satellites are launched into space overhead. These satellites bring not only Internet and data connectivity to the area, but also high definition video feeds and ground penetrating radar that can help facilitate search and rescue efforts. Financial aid and charitable donations that would normally incur transaction costs and take days to arrive can now be sent instantly and for free via the Bitcoin network. Potentially, the overall loss of life is reduced, injuries are mitigated and rebuilding efforts are accelerated because two technologies have allowed goodwill and compassion to go to work that much faster.

I am thankful that the desire to build beyond what we have inherited and push beyond our own preconceived barriers, are fundamental human traits, and when realized, engender the truest sense of accomplishment. These traits are responsible for every human breakthrough and advancement since the dawn of mankind. They are why we are still here on our planet today, and why we stand a chance of being here tomorrow…or on Mars. When we can, Cameron and I will always do our best to support them.